During lockdown, Cross Lane Projects interviewed John Stephens, the curator for Made With… featuring artists Maxine Bristow, Anna Fairchild, Sian-Kate Mooney and Mark Woods, on the initial idea for the exhibition and how the design and curation of the show was conceived.

CLP: What was it about these four artists that made you want to create this exhibition?

JS: In early 2018 I was having a conversation with Maxine Bristow, about a recent body of her work: conceived as a series of variable installations that drew on a catalogue of three-dimensional elements fabricated with materials commonly used in furnishings; upholstery, woven textiles, steel, plastics… I have known Maxine for a long time and am very familiar with the evolution of her work over the years. And I knew about the close relationship she is keen to establish between the materiality of her work and the significance it had in terms of the cultural associations that we make with it. Especially the kind of fabric-based domestic and industrial work, often anonymously produced by women. She spoke of the idea of ‘productive indeterminancy’ and ‘the privileging of aesthetic impulse’. She also talked about the idea of her work being aesthetically seductive but then becoming confounding in terms of its reading.

As both an artist and a curator I’m interested in a concept used by Theodor Adorno in his ‘Aesthetic Theory’; the idea of semblance, [I see it in the sense of the original German, Anschein; what is apparent or what can be read] and for me this encompasses the way an art object is made, its materials and how it’s configured and its articulated meaning.

During the conversation I became acutely aware of my own interests in art being focused on work in which the material asserts itself primarily and through which meaning could be read. I’d felt for some time that Maxine’s work deserved to be shown to a wider public and that showing it with a small number of artists that I knew of and whose interests also involved a focus of materials might be a way of creating a context in which the idea of materiality could be a dominant feature. 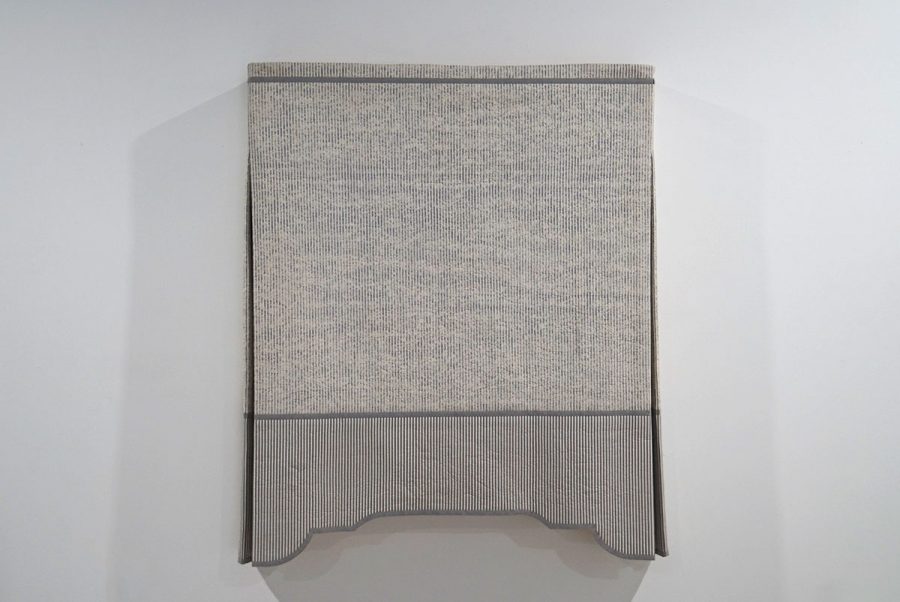 CLP: Did you give the artists a brief?

JS: I’d worked closely at different times and in different context with the other three artists in the show; Anna Fairchild, Sian-Kate Mooney and Mark Woods, each working in their own ways with a focus on materials and the processes with which they make things. It struck me that bringing Maxine’s work together with their work could fulfil the ambition of a show in which material and the way it’s used in making was the main focus. As I familiar with each of the artist’s work, I felt that I didn’t need to give them a brief although I had made clear what the intention of the show was. We agreed that I would make individual studio visits to look at each of their work more closely and together make a seletion for the show. 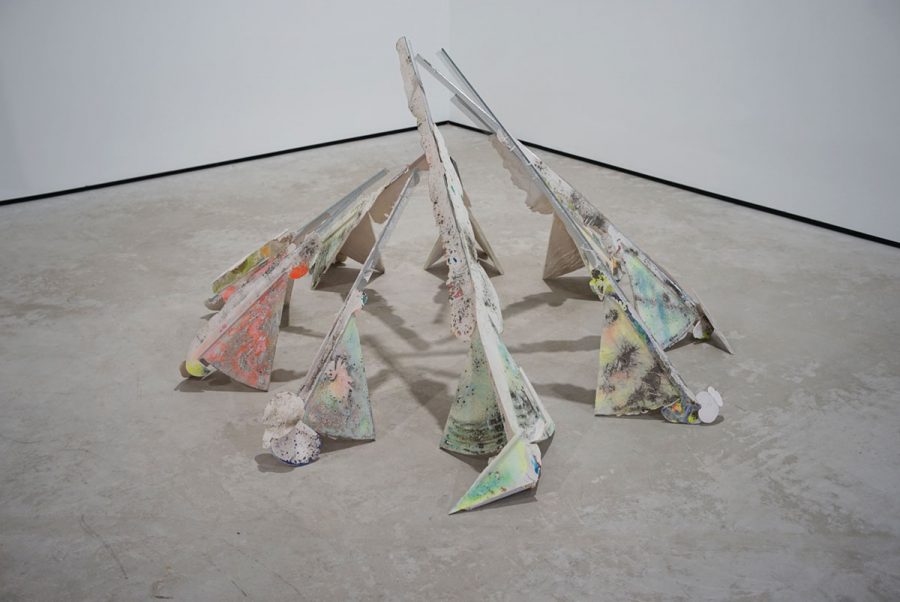 CLP: How did you/the artists select the work?

JS: I had agreed with each of the artists that during the studio visits we would discuss their work and its current direction, then make a consensual selection. As it turned out, in the cases of Anna and Sian that meant looking at the work that was in development so it was useful to see how the show could act as a catalyst in realising a nascent ambition. In the cases of Maxine and Mark, although their work already existed, the discussions focused on how the work might be shown in the context of a group exhibition and there was undoubtedly some excitement about them rediscovering work and thinking about how it would be configured for the show. And, with both these artists it resulted in re-making new elements for some individual pieces already in existence.

Whilst not planned, it turned out that the work of Maxine and Mark tended to represent what might be described as a constructive approach whereby the work could be seen to be assembled in a predetermined way and that the work of Sian-Kate Mooney and Anna Fairchild as an entropoc approach exemplified by a more intuitive approach to the making of their work. In either case the viewers is drawn to the work through the aesthetic enticement of its materials, but which then transcend what they are, to assume a new significance and meaning engaging the viewer in another level of experience. 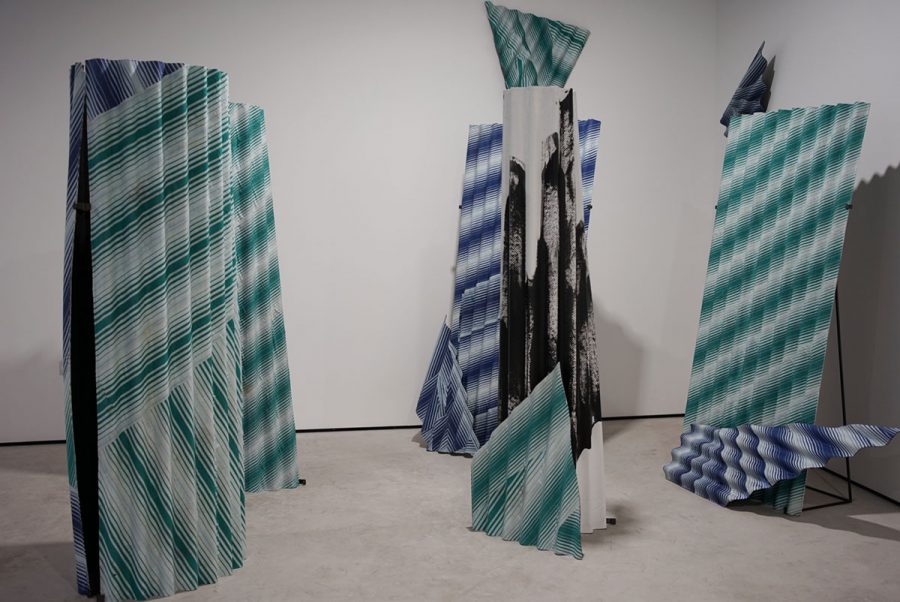 CLP: Did you have a clear idea of how the exhibition was to be exhibited? Or was it a case of curating it once the artwork was in the space?

JS: I had, from previous visits, quite a familiarity with the exhibition space. And, not lease I had from previous exhibitions an insight into different ways in which the space could be configured. In the period building up to the installation of the show, I went through various mental scenarios and curatorial configurations. I was trying to anticipate problems in my mind; for instance, the point of view that the visitor might have on entering the gallery of certain pieces; I wanted to ensure that they, the pieces, were show in their best light. This guided the initail stages of the installation. I was however done in close collaboration with each of the artists individually but then also collectively. So, in answer to the question, the final curation was the result of both approaches. 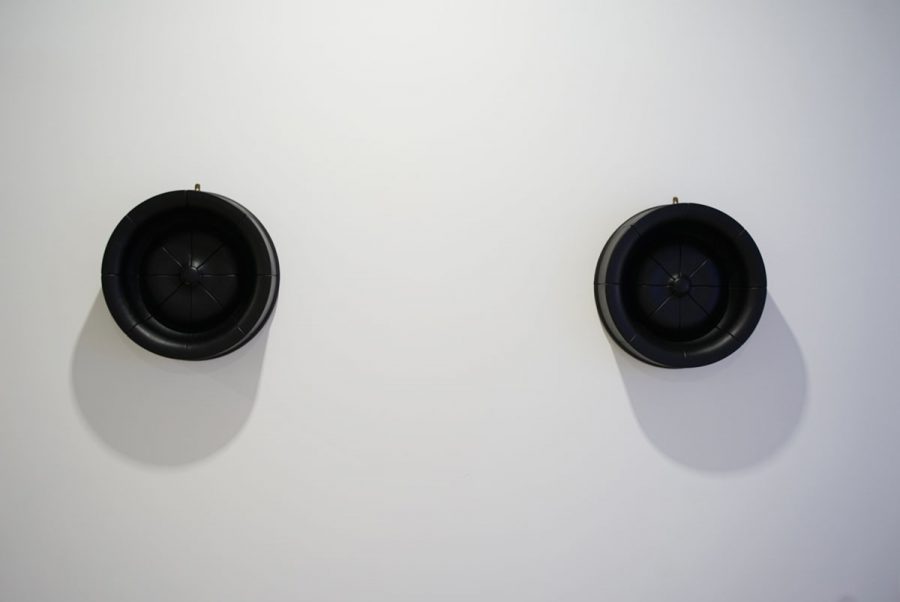 CLP: What made Cross Lane Projects so appealing for this exhibition?

JS: Having seen the evolution of the Cross Lane Projects space from its early renovation in January 2018 to its first and subsequent shows and, understanding the ambition of its two founders Rebecca Scott and Mark Woods. I felt I’d like to make a contribution to what I feel is a very worthwhile project that contributed enormously to the cultural life of the region. Rebecca Scott and Mark Woods have been very active artists in networks in London, principally in a nexus of shows and projects initiated and curated by Vanya Balogh, who has over the last ten years or so, been responsible for large scale shows both in London and abroad, often working with 200 artists at a time.

Not only does Cross Lane Projects offer a very versitile and ideal showing space; it has, as a project been very successful at capturing that creative energy and bringing it to the North West of England; The Lake District. I wanted to contribute to that energy and at the same time exploit the excellent showing space that it affords for the kind and scale of work in this show.

There was also undoubtedly a coincidence between my first visit to Cross Lane in its early stages in 2018 and my meeting with Maxine shortly afterwards that prompted me to think of it as a potential space for the show that was forming in my mind.

Photography by Rebecca Larkin. All works copyright the artists.