Lawson Oyekan (b.1961) is a British Nigerian contemporary sculptor who studied at the Central School of Art before moving onto doing his masters at the Royal College of Art. Currently living in France, he has participated in residences at the Northern Clay Centre, Minneapolis, USA, The Portland Sculpture and Quarry Trust, Dorset, UK and the Maryland Institute of Art, Baltimore, USA.

The development of his work comes from his training in porcelain wheel throwing and has developed his own techniques through hand-building, making larger, monolothic forms. His work is characterised by surfaces often left dry and unglazed, the larger, thin-walled vessels appear robust but fragile and are covered in almost scar-like marks that resemble ancient spiritual vessels.

Oyekan’s pots are often pierced using different marks, organic in nature rather than tortured and part of an ongoing internal and external dialogue, often in English or his native language, Yorbua. There is a robust tenderness, a tension, between the delicate manipulation of the materials and the structure of vessels. They speak of human struggle and a spiritual strength through the solid corporeal structures. The imposing compositions celebrate the power of nature to inspire contemplation, renewal, and transformation, whilst also reflecting his concerns about its destruction as a result of human foibles. A recurrent theme within his work is the physical drama of nature’s complexity and his monumental ceramic installations are usually the result of an encounter with a particular place.

Ceramic artist Nicola Tassie initially studied painting at the Central School of Art but took up ceramics soon after completing her BA, establishing a studio in Hoxton in London in the 1980s. She has a broad based practice which easily emcompasses both wheel-thrown editions of functional pots – most especially jugs – as well as more sculptural works which explore the expanding precints of ceramic form.

‘Folly praises herself endlessly arguing that life would be dull and distasteful without her’ – Erasmus – ‘In Praise of Folly’ (translation by John Wilson).

In all the ‘Folly’ series, the structures are made up of an accumulation of randomly thrown vessels that are repurposed into non-designed towers of glazed pots. They replicate a massing of household’s domestic ware, stacked up for storage in diminishing space. The resulting tower’s arbitrary profile is dissected by the language of Glaze surface. These Follies of over consumption are a precarious proposition – they hold a fragile equilibrium; playfully seductive in their objectness; aspirational in their reach but uncertain as to their purpose.

I see the Follies as pots, stacked up high in a precarious effort to reach beyond their – often invisible/overlooked-domestic sphere. In previous Follies series the multi-glazed totemic structures were named after female household deities. In this third series, I identify them as Sibyls – women prophetesses from the classical age. Thier prophecies were sometimes – like Cassandra’s – ignored or disobeyed. The Follies series gives presence to the realm of the quiet or unheard – the domestic vessel – but in these stacked structures they move from the condition of containing, enclosing space to inhabiting an intervening in it.

Heraclitus (fl. 500BC), the ancient Greek philosopher, wrote ‘The Sibyl, eith frienzied mouth uttering things not to be laughed at, unadorned and unperfumed, yet reaches to a thousand years with her voice by the aid of god’.

Sibyl were often named after their place of habitation but some were given names. Michaelangelo depicted five Sibyls in the frescoes of the Sistine Chapel. 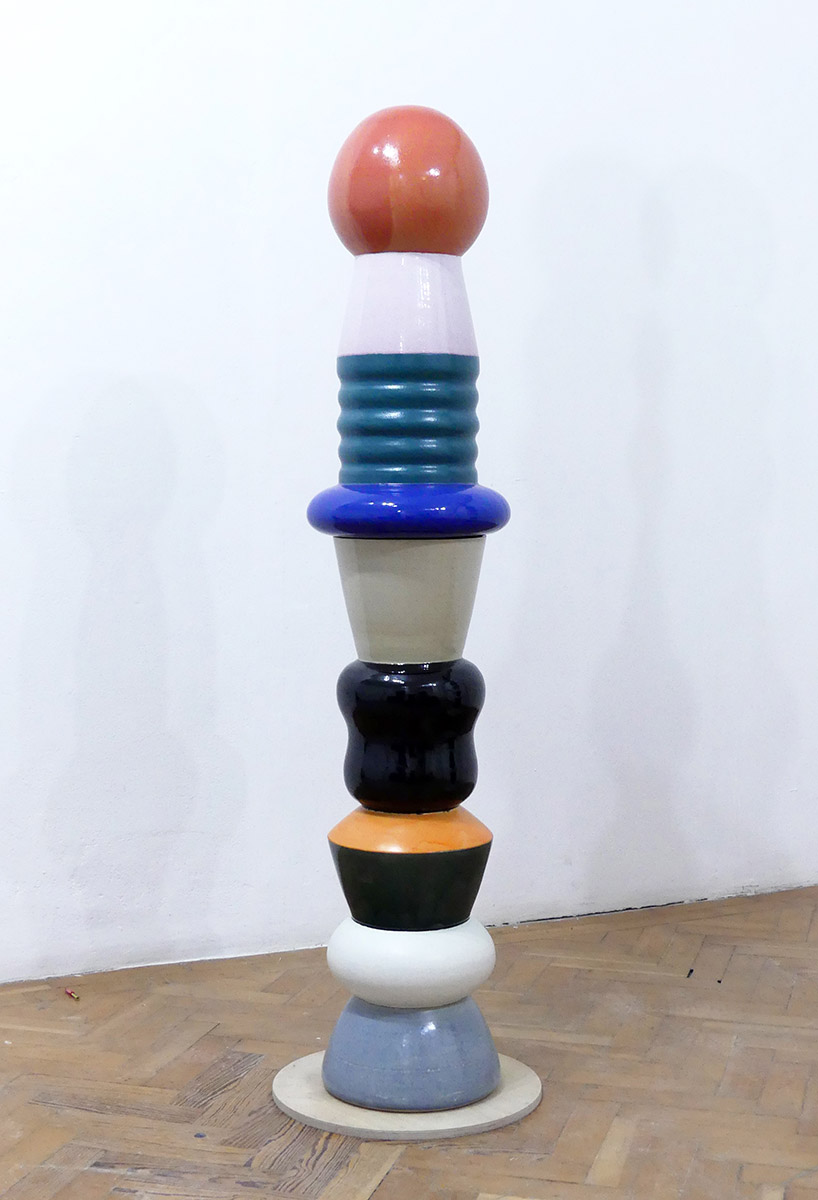