Emma Cousin: You have described your steel armatures as ‘drawing in space’ which become a tool to build. I wondered how these drawings come to you? Are the armatures the “grid” that you’ve gone off?

Olivia Bax: I doodle in my notepad to record or think about forms I have seen which interest me. These early sketches are almost always linear. For example, over the last year I’ve been drawing window grilles, plant holders, hay feeders, air vents and appliances. I use steel to make the armatures because the process of cutting, bending and welding is quick and intuitive. This means that my armatures don’t need to follow a pre-formulated plan but can become something new in three-dimensions. Then the armatures become exactly what you said – “a grid to go off”.

EC: It feels like you fill out and expose form and line archaeologically, humanly and in some areas mechanically, like showing us under the hood or inside the pocket. Can you speak about your inside / outside, full or empty methodology?

OB: My work starts to come to life when the linear turns into a solid. It gives the work its character. The line becomes a parameter but the options are vast. I like it when I get lost in the process and almost forget where the outside stops and the inside begins. I often think of it like our front and our innards. I hope the sculptures can reflect emotion: feeling exposed and vulnerable or confident and firm. I want the work to be generous; to lead you in and around all the different spaces, to point to somewhere, and then lead you – literally and metaphorically – somewhere else.

EC: I know your palette is found (reclaimed / discarded) but can you talk about decisions with colour, which in this show are very particular? Kingpin is like a bruised raspberry. There is a going-off quality to the browning pink in the Grille work, like rotten leaves or cold chips. And then there are the benches, Rollers, which are a powder-coated bright yellow.

OB: I use colour to create mood. It’s true that I use discarded household paint in my paper pulp mix but I am drawn to vibrant colour. For the work in Off Grid, I had the Scottish landscape in mind. I spent a lot of my childhoos in Highland Perthshire but it’s only recently when visiting my parents that I’ve been struck by the array of tones in the heather. I found the purple first and started collecting different pinks and purples to cover the vast form of Kingpin. I tried to use different tones to exaggerate the undulations. And one colour is decided it is the case of bouncing off that to create the right vibe. I knew I wanted the Grille works to be reflective and sombre. Portal had to be striking in mid-air. Rollers and the stands under Kingpin were both powder-coated the same yellow. I wanted the colour to make the link between supporting the sculpture and supporting the viewer. Yellow seemed the best option to highlight this link – in the same way the colour sings on a Scottish mountain. And then there is Hopper which is on wheels. It’s taken a wash of all the colours used in Off Grid, as if it took remnants from all the work as it whirled past.

EC: You have talked about Kingpin being many different stories in one piece. It is large scale and consists of 17 parts. Can you talk about this biomorphic make up and how the structure will evolve across different spaces?

OB: The MTSA gave me resources to work on one sculpture for an extended amount of time. When I was making Kingpin in the studio there was no space to do anything else. I was thinking about objects with multi-uses and spaces which direct people a certain way. I wondered if I could make a sculpture which evolved or mutated. Most of my work preceding Kingpin had one overarching feeling / stance / impact but with Kingpin I wanted there to be several. It started as a flat plane or table top. From there I wanted to go underneath, to fall through. And then I wondered how it could explode up explode up, out and beyond. I was thinking of draining, collecting, filtering in one place and then climbing, expanding, discovering in another. I became obsessed with trying to uncover as much as I could in one work.

At Standpoint I wanted to play with the architecture and the ‘stage’. Instead of a sculpture framed on the raised platform, Kingpin could fall on to it. I have an additional section for Cross Lane Projects so it can be shown on an even floor. I can never resist going taller so the top T bar will extend. The advantage of making sculptures in parts is not just that it can get out the studio door (!) but it also allows more flexibility in the display. It can respond to the architecture of the space in each iteration of the MTSA tour.

EC: The work embodies state changes. How does the materiality inform the final work? Can you talk about how this physically manifests in the studio?

OB: I talked about wanting to make a sculpture which looked like it was mutating but the process often does that for me! When I mix the paper pulp, there is a lot of water in the material. SO when I add the pulp it puts pressure on the structure. When the pulp dries, it shrinks and becomes solid and hard. The surface hand marks become the evidence of the struggle! I want to keep the sections light so there is minimum amount of support even in the large lump section. That particular part changed so much during the drying process. I was desperately working over itm under it, and on it to try and maintain the imagined form. Eventually I realised I had to give into it and let it do its thing. It meant the sections I had carefully irchestrated to join no longer fitted. This can be heart-breaking, but it also gave me another opportunity to respond to the work. As in life, there are expectations and realisations.

I remeber seeing a chair that Thomas Houseago made for drawing. It was custom built around his body so he could sit in the exact way he wanted. Kingpin became a functioning multi-use object to assist me in the making it. The table top became a useful resting point for my bucket. I imagined needing a shelter, so I built one (later removed); when I kept losing my tools, I used the sculptures’ pockets to store them; when I couldn’t lift a section, I added a handle. 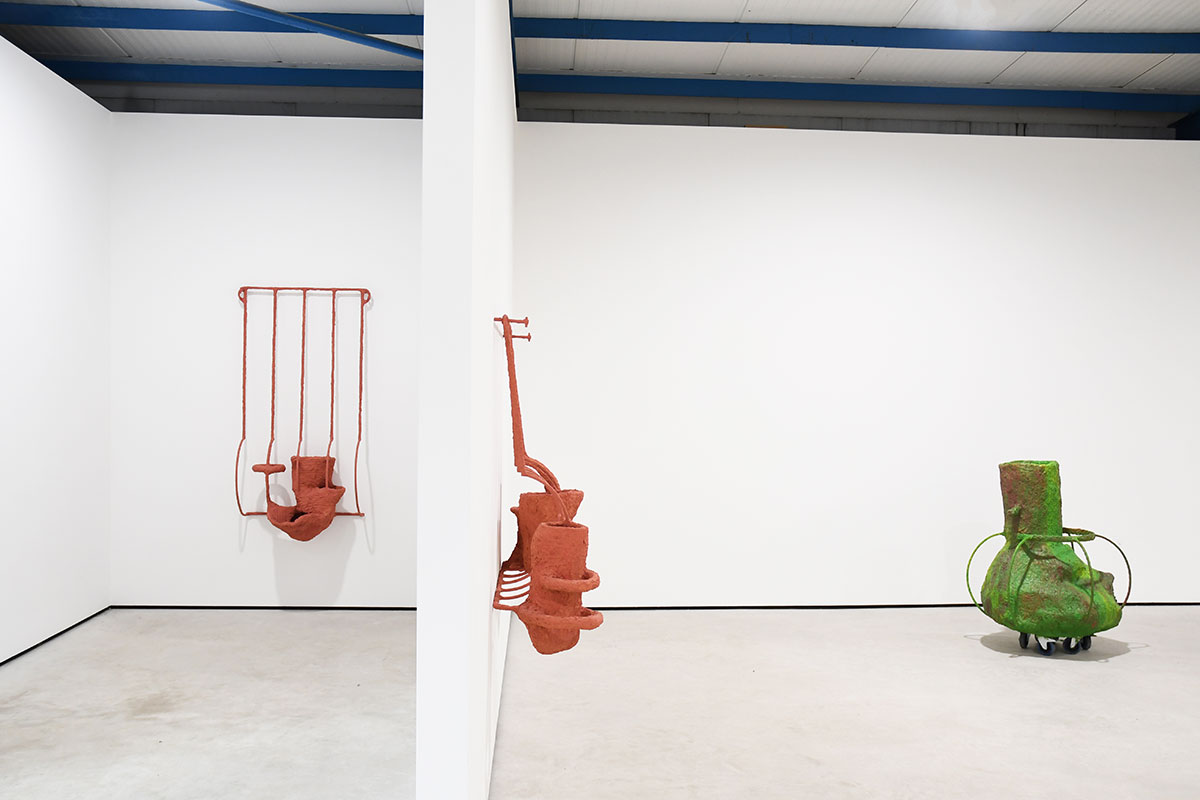 EC: There is a tension between figuration and abstraction in your work. Is this important?

OB: I think the word ‘abstraction’ has been misappropriated as a label to attach to work that we don’t readily understand. My work is not figurative per se, but I want the work to relate to humans and our world and to suggest use, function, purpose and feeling. The work relates to my own body through the physicality of the construction. I am happy jostling in-between figuration and abstraction.

EC: Restrictions are something we are all facing at present. Extensions are a necessary concern for you when you have to move sculpture from the studio to an exhibition venue, or to store it etc. Can you talk about the significance or relevance of restrictions and extensions?

OB: I was thinking of extensions and restrictions long before the pandemic. It is amazing how the crisis has given all of our work a political reframing. With the Grille works, I was considering how window grilles are there for security to keep people out. I have seen how mainland Europe, they often double as space extensions for plants and therefore growth. I have been interested in balcony spaces for some time too and how they are extensions of living quarters. During lockdown they became such a privilege in urban cities. I found it interesting how they can be used for storage, exercise rooms, washing lines or resting space.

My sculptures must extend (from modular components) in the studio to filling voids in an exhibition venue. I could not hang Portal in my studio so seeing it installed at Standpoint was the first time I had realised the work. When I decided to have Rollers fabricated at Benson-Sedgwick, I considered how they could fit inside each other – for storage – but also so they could take on new iterations: plinths, steps, benches, room dividers, upright seats etc. I often think my work is restricted by where I can reach and what I can lift. But battling with restrictions and extending oneself is all part of the fun. 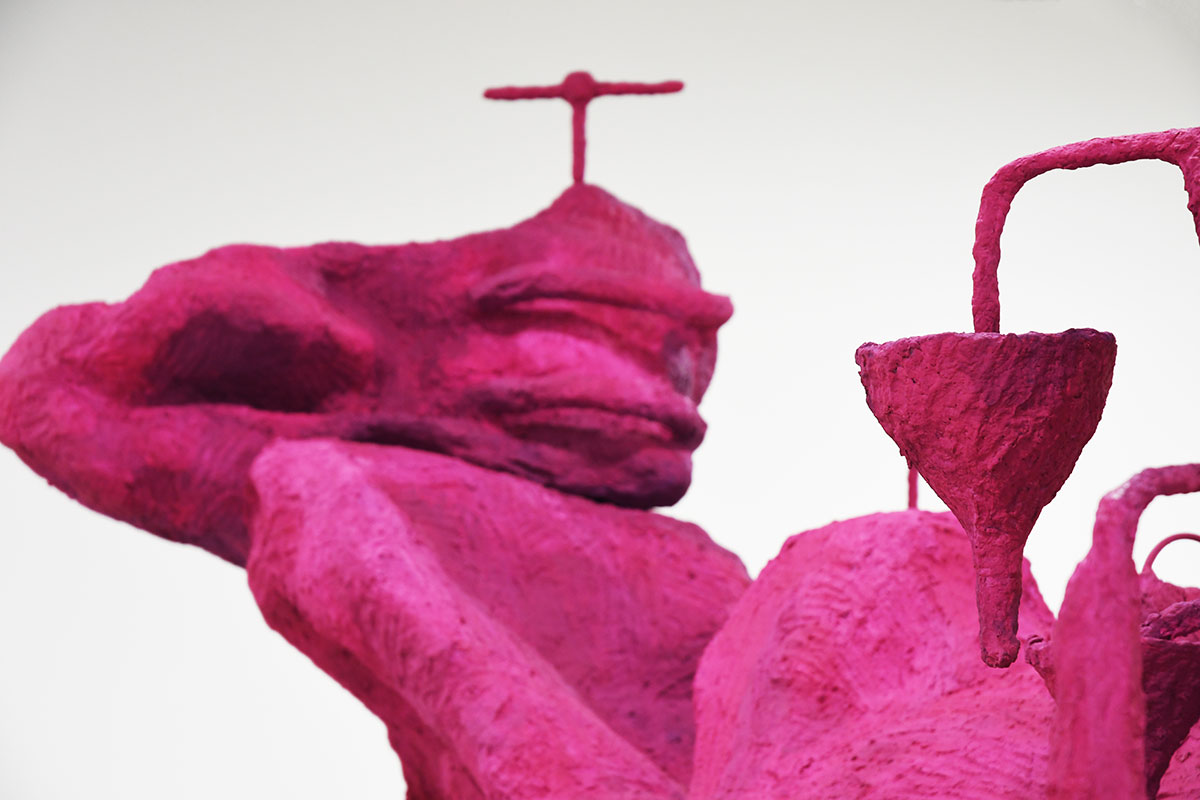 Emma Cousin is a painter from South East London. She has a studio in the same Space Studios as Bax and the artists have shared dialogue about upcoming exhibitions of the last year. These questions were introductory questions for a recorded podcast Cousin started in lockdown called Chats in Lockdown: Artists Talking. The recorded interview with Bax is available to listen to on Spotify.